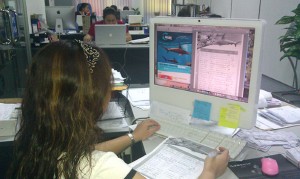 Sabah, Borneo: If sharks only knew, they would be smiling; Downbelow have collected 500 physical signatures for Project AWARE’s Give Sharks a Chance campaign, which we submitted last week to be added to the thousands of others.

This is on top the electronic signature being collected via the online shark petition, so if you’re reading this and feel for the ocean’s apex predator, then join the cause and sign the petition.

Through talking to people, we’ve been quite amazed by how passionate about sharks they get when they hear of the terrible ways in which sharks are killed for their fins and the rapid rate of their decline.

We know there are so many more passionate people out there, who simply have to be ignited by awareness. Once that passion is ignited through awareness, it should be harnessed and used for action – such as signing the shark petition.

This is what the Project AWARE shark petition is all about. It’s an action to show the government legislators that there is a tangible demand for laws and mechanisms to help stop the killing.