Animals at the Dive Station on Gaya Island

Animals at the Dive Station on Gaya Island

Gaya Island, Tunku Abdul Rahman Park: It’s no secret that Gaya Island teems with wildlife below the surface, but we’ve also seen our share of wildlife in and around the relatively untouched jungle of the island too. 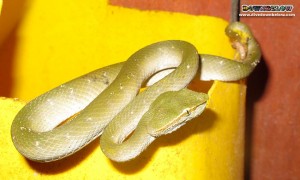 The latest visitor to our PADI 5 Star IDC Dive Center on Gaya island was this young, beautiful pit viper.

The ‘pit‘ in pit viper refers to a fossa – a pit of sorts – in the area between the nostrils and the eyes on either side of the head.

The pit is home to a membrane which gives the snake a 6th sense – infrared vision.

With two such organs, 1 on either side of the head, the viper also sees infrared in stereo, which means not only can they detect prey, they can also tell how far away it is.

In order for this ability to be effective, the prey needs only be 0.02°C warmer than the background, a very effective tracking device giving their nocturnal prey very little chance of hiding.

Although pit vipers are venomous, because of their keen senses they usually avoid humans, but are in any case  not aggressive unless provoked or threatened, and are thus easily avoided in the rare cases that they are encountered.

This particular specimen was found in the nice and warm compressor room where there is very little of both aggression and provocation; the worse he did was keep our island crew on their toes.

Our Facebook page has a growing album of other non-marine animal encounters we’ve had around our Gaya island dive centre.  Why not join us for a few of your own?