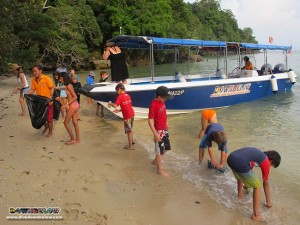 TAR Park, Kota Kinabalu: Conservation is dear to our hearts, which is why we like to include a Project AWARE conservation element in our group programs.

With the kids from the Australian International School (AIS), Singapore, it was no different.

The group of 14 students from the AIS, plus their teachers, were with us last week doing open water dive courses, but they also learned plenty about the environment.

One of the activities Downbelow had planned for them was a beach clean-up. As much for awareness as a way to give a little back to the environment from which they pit so much enjoyment.

To maximise the impact of the activity’s message, we took them by boat to one of Gaya island’s beaches which is not visited by anybody, because it’s hard to get to.

“If nobody goes there,” asked one of the kids from our resident Course Direct, Richard, “why would there be trash?” 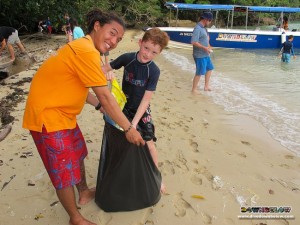 While they picked up a variety of trash from the otherwise deserted beach, Richard explained to them what happens to rubbish if, for instance, it’s thrown out of a car window.

(apparently one of the top sources of indiscriminately discarded trash in Kota Kinabalu).

It lands on the road. Rain washes it into the gutter. From the gutter it’s washed into the storm water drain.

In there it flows to the ocean and once in the ocean the currents take it and distributes it, seemingly randomly, to whatever beach it deems fit.

Imaginary lightbulbs lit up as the kids realised how far trash can travel and what a great impact humans can have on the ocean environment even when we’re not necessarily near the ocean. 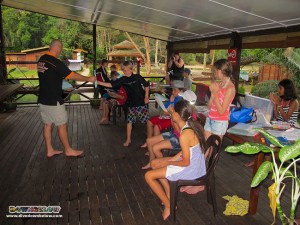 Pass On The Lesson

They eagerly helped clear the rest of the beach.

Back in Singapore the students were scheduled to give a presentation at an upcoming school hall assembly.

They will tell the other students what they learned on their trip to Kota Kinabalu, Sabah.

We’re certain the cause and impact of marine debris will be well communicated.

We would love to help you get your group involved in marine conservation and awareness programs.

Just email us to tell you what you have in mind, and we’ll tailor something to suit your needs.