Biggest Net Yet Removed from the TAR Park

Biggest Net Yet Removed from the TAR Park 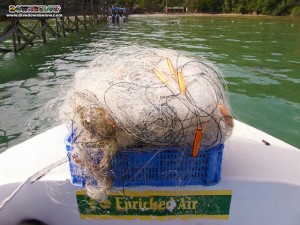 Tunku Abdul Rahman Marine Park, Kota Kinabalu: Another week; another net.  Our island staffers have been hard at work thwarting the destructive effects of another illegal net in the beautiful TAR Park in Kota Kinabalu. Elvis reports.

On 31 March Downbelow’s international divemasters spotted a large net whilst on a guided pleasure dive in the TAR Park here on the doorstep of Kota Kinabalu.

“The net was choking a reef”, said James – IDC Staff Instructor at Downbelow, “sitting in about 9 meters of water.”

Eager as ever to remove the net before it does too much harm to the coral and marine life, James, and Downbelow MD Richard, assembled the rapid net removal team. 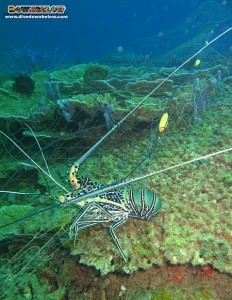 James said it was the largest net Downbelow has ever removed from Kota Kinabalu’s marine park.

“It took a total of 4 dives to remove completely”, he said of the expansive illegal fishing net.

“It looked new, but already had some marine life caught up in it.”

Whilst cutting the net down to size the team managed to free a couple of large lobsters, and also came across a trapped blue spotted ray.

“This is the 4th net we’ve removed this year in what is becoming an all too frequent occurrence.”

With conservation efforts in Kota Kinabalu’s government protected TAR Park having intensified in recent years, the park has seen a dramatic return of fish and other marine life to the vibrant reefs.

Unfortunately not just eager SCUBA divers have noticed this, but eager illegal fishermen too.

“As long as they keep coming, we will keep removing them”, James said about the nets, reaffirming Downbelow’s commitment to continue participating in the conservation of the TAR Park. 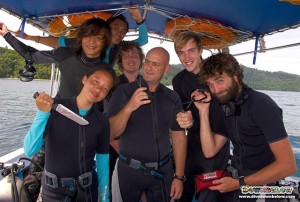 “Along with Project AWARE Foundation we are determined to keep raising the importance of preserving what we have here in Kota Kinabalu.”

Project AWARE Foundation is a PADI initiative which highlights the importance of the world’s marine and coastal environments, and perpetuates awareness and education of how to protect them.

“We are happy to remove nets from the TAR Park”, James concluded, “so we encourage any divers in the park who come across nets to get in touch and help us find it for removal.”

If you find a net or want to become involved in Project AWARE programs in Kota Kinabalu, contact Downbelow, or email them directly.