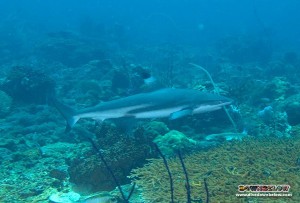 You then probably also know that we passionately support the Project AWARE Shark Petition (which you should sign if you haven’t yet), and that we were are very excited about spotting more and more blacktip reef sharks right here in our humble home, the TAR Park, Kota Kinabalu.

Our resident PADI Course Director Richard, who spends more time underwater than above, says he saw his first blacktip reef shark in the TAR Park in 2007 in pretty much the same spot he does these days.

He figures that over the years he’s spotted at least 25 over different ones right here on Kota Kinabalu city’s doorstep.

Only in the last year has he started documenting them, studying their habits and captured some hard earned photos of them. Since then he has documented evidence of 15 distinct blacktips.

Whilst compiling a full report, Richard has passed on some findings to Sabah Parks and UMS in the hope of better protection of the area. A marine police tower near the Gaya lighthouse, that will provide better visibility and policing of the area, is positive feedback in this regard.

Come join us for a shark hunt of the loving kind and lets see ourselves some blacktips!

Be warned though, the shark enthusiasm around here is highly contagious!