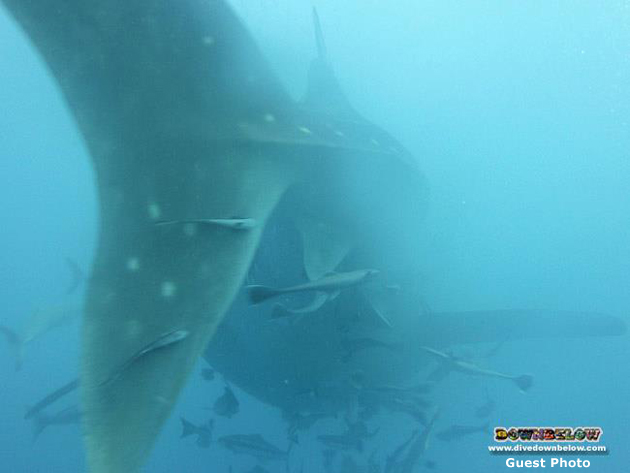 Sunday was another beautiful day in Kota Kinabalu’s TAR Park where Downbelow is hosting a group of 19 students from the University of Glamorgan during their research project in Sabah, Borneo.

Resident PADI Course Director Richard was, as always, in the water, this time leading a group of 6 students and assisted by one of our professional interns, on an Adventure Diver course.

During the Fish ID dive of the course, things went from adventurous to downright exciting, when something big came up for a closer look, perhaps wanting to be identified?

Kota Kinabalu, not too far from the northern tip of Borneo as we are, have seen quite a bit of whale shark action this season, which typically stretches from January to March. We’ve had whale shark sightings every month so far this year.

In spite of this, when the 2 large beasts appeared from the blue it was nevertheless a surprise.

Not only did the 6 students doing the adventure dive get to see the whale sharks, but the remainder of the group, doing a fun dive nearby also got to see them.

One of the group, David Taylor, had a camera handy, and managed to snap the tail end of the pair as they made their way past the group.

“I’m pretty pleased with this picture”, David said commenting on the pic posted on Facebook, “even with my novice underwater photography skills.”

Novice skills perhaps, but that makes the catch all the sweeter.

We hope that the whale sharks will be around this part of Borneo for still many weeks to come, and will keep a keen lookout for whale sharks in Kota Kinabalu.

If you fancy your chances of seeing a whale shark while diving in Kota Kinabalu, contact us and let’s go diving.