All over the world shark populations have been devastated, driven largely by the demand for shark products.

In spite of increased awareness in recent years of the unsustainable practice of shark finning, sharks numbers are still declining.

Targeted fishing, and the scourge of bycatch, contribute to this decline.

Awareness of the problem, however, is not enough; action is required.

Now is the time to add your voice to thousands of other AWARE divers and shark advocates who are serious about shark protection.

An initial goal was to reach 100,000 signatures to the Shark Petition, which calls on the governments of the world to heed scientific advice and properly protect the shark population.

Our campaign last year recorded success with the closing of loopholes in the European Union Finning Ban and the announcement of the world’s largest marine reserve network in Australia.

The campaign continues and the more people stand up for the survival of sharks, the better.

We have strength in numbers and together we are getting the attention of policymakers worldwide.

We are setting our sights on CITES 2013 with plans to secure listing for some of the shark species most deserving of CITES protections: hammerheads, oceanic whitetip, spiny dogfish and porbeagle sharks. We’re also aiming for consideration of sharks’ close relatives such as the heavily traded manta and devil rays. 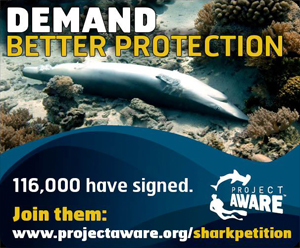 Join now! Add your voice to the Project AWARE Shark Petition by filling in the form above.