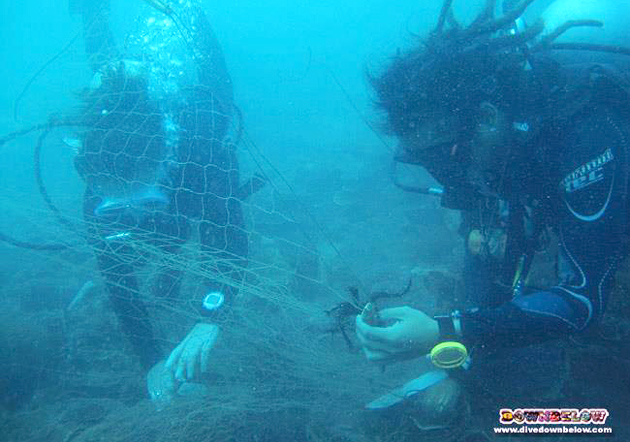 It was another bright and sunny day in Kota Kinabalu’s Tunku Abdul Rahman Marine Park yesterday, perfect for diving.

Resident PADI Course Director Richard Swann was leading Downbelow’s pro interns on a dive around Ribbon Reef when he spotted the scourge of the park.

Because of the park’s wealth of marine life and its proximity to the city, fishermen just can’t help themselves when they try to make a quick catch with illegal nets within the park’s boundary. 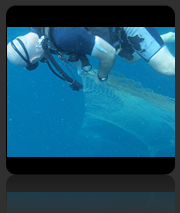 Sometimes things just don’t go the fishermen’s way however. Frequently nets get stuck on the reef, can’t possibly be undone by yanking from the surface alone and are ultimately abandoned to settle on and choke the reef.

It was such a net that Richard discovered on Ribbon Reef, one of his favourite spots in the park. The net sloped from 16m down to 30m and he knew, because of the depth, that it would be a challenging removal.

Nevertheless, within 2 hours the presence of the net was reported to the local marine authority, Sabah Parks, and a team from Downbelow’s island crew and interns were assembled, briefed and heading back to the site to zap the net.

The team descended to the reef and, at a steady pace, untangled the reef and cut the net down to size.

Due to the depth and limited bottom time however, the largest remaining part of the net couldn’t be cut smaller for transport to the surface.

Instead Richard and James surfaced with the whole section of what is likely a 150ft net. After clinging on to it during the 5m safety stop, they retrieved it by hauling it onto the dive boat.

Still alive horseshoe crabs, stargasers, lobster, various other crustaceans and fish were successfully freed from the net that was entirely removed by the Downbelow net removal team.

It was the first such experience for Downbelow’s professional interns Leanne and Sara, so well done to them, and many happy returns to Project AWARE events in future.