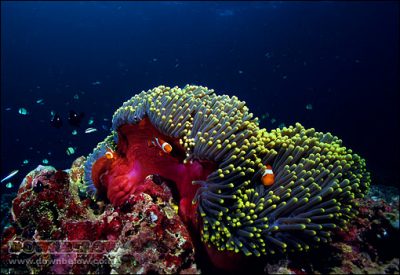 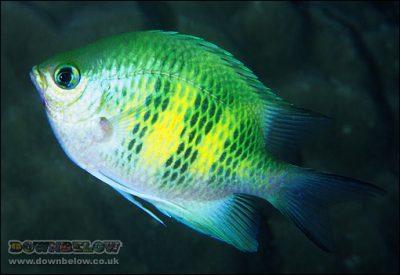 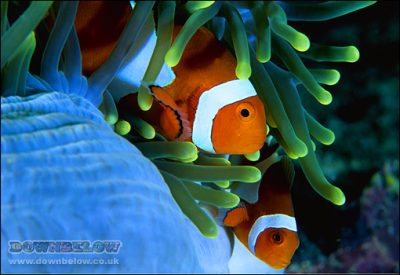 They share a symbiotic relationship with host Sea Anemones where both creatures benefit from each other’s presence. One Anemone can host many fish. Resembling plants, Sea Anemones are in fact meat eating animals with stinging tentacles. Anemone fish build immunity to these nematocysts by developing a mucus coating on the body. They swim in a unique way differentiating themselves from the prey of the Anemone, this swimming style signals the host not to fire its poisonous sting. In return for shelter, they are good housekeepers, ridding their host of unwanted parasites and leftover food bits, they are ferocious in defending their territory offering protection from Anemone eating fish such as butterfly fishes.

Clownfish have a mucus layer to protect against the sting of the anemone. Should an Anemone fish relocate it might take days for their coating to develop the correct balance sufficient to avoid being stung. Clownfish and some Damsels are the only fish able to avoid the potent sting of the sea Anemone, but not all Anemones are suitable hosts some will sting and consume potential housemates. Many species of Anemone fish can be observed inhabiting only certain species of anemone. The Western Clown Anemone is generally seen living with the H. Magnifica. Others species of Anemone will host many different species of Clownfish. 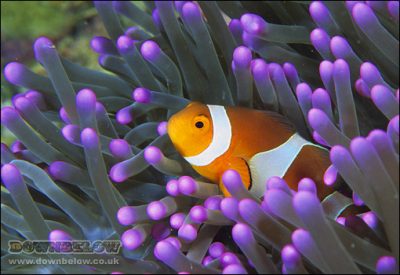 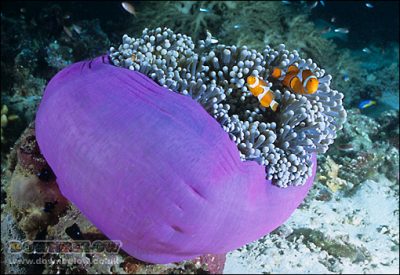 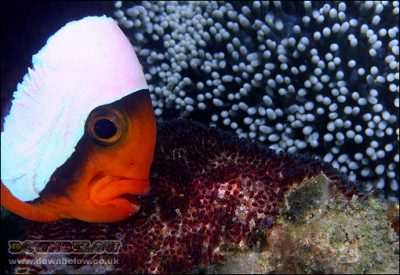 Clownfish have a fascinating system of hierarchy within their community, which prevents conflict within the group. The largest fish is always the female, the second largest is the breeding male, the rest are all males, juveniles usually look different to adults and they are all hermaphrodites. When the female of the group dies the dominant male will change to a female and take her place, this change is irreversible. All other fish in the group will move up one place, the next male in line then becoming the dominant male and interestingly each fish is exactly 20% smaller than the one above it. When environmental conditions are suitable the female will lay her eggs on a flat surface close to or beneath the host Anemone, if none is available she will move something close by. The male externally fertilises the eggs. 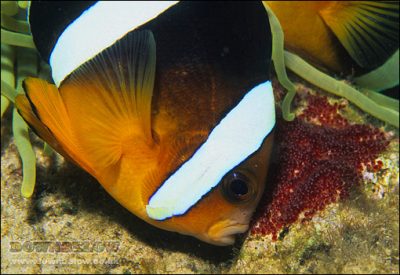 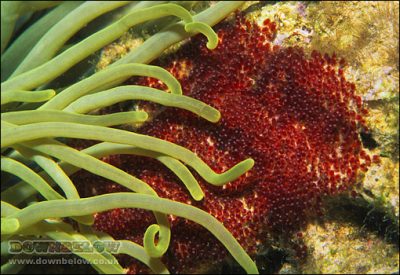 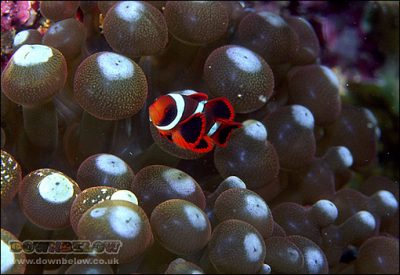 The anemone releases a compound, which the adult fish gently blow onto the eggs and its thought that this aids in building up the juveniles’ immune system. It is generally the male who guards and tend the eggs, fanning them to keep them oxygenated. The moons cycle dictates when the eggs hatch. The pelagic larvae float in the water column until the time of metamorphosis when they become juveniles. It’s very difficult for these youngsters to find a host and unless they find an anemone without an existing community or find a group with a vacancy due to a death they could well be left homeless and vulnerable to predation. Many do end up as fish food. Fortunately, the juvenile illustrated in the image gallery above has found an available anemone although he must swim carefully until his mucus covering has developed sufficiently enough to avoid its stinging nematocysts.