Focusing on the Family: Sepiidae – Cuttlefish 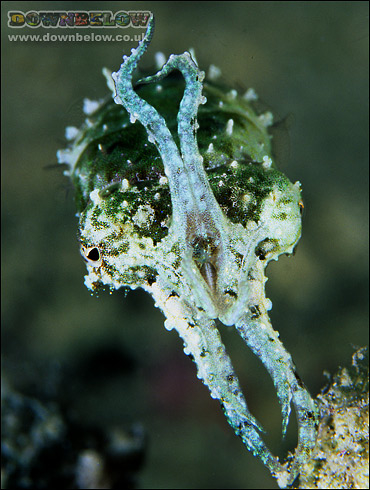 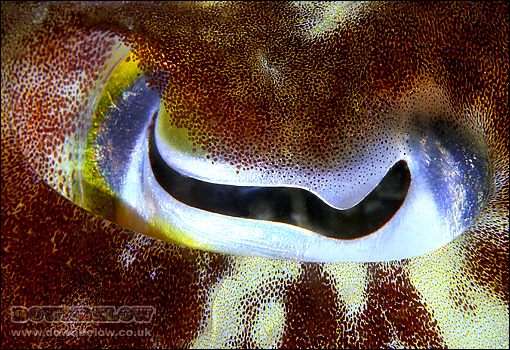 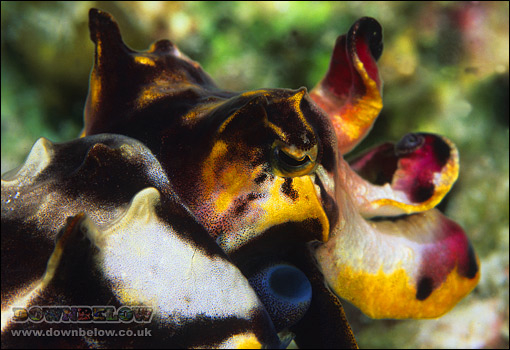 The Cephalapod, meaning “head foot”, belonging to the phylum Mollusc, is characterized by a prominent head and modified mollusc foot in the form of arms or tentacles.

The class contains two sub classes, Coleoidea in which species have either no shell or an internal shell; this class includes octopus, squid and cuttlefish. The second class is Nautiloidea where the shell is still in place; Nautilus are grouped here.

Cuttlefish appeared on earth approximately 500 million years ago and today live in all oceans of the world at all depths. There are approximately 800 living species of Cephalopod and surprisingly little is known about the majority of this species. Most do not inhabit coral reefs, but live in the deep sea and it would seem none live in fresh water.

Cuttlefish are extremely intelligent and have superb eyesight courtesy of big, highly developed eyes similar to humans, but with w-shaped pupils. If you can win the trust of a cephalopod you can have hours of fun playing and stroking them, but you must be patient and kind.

Cryptic behavior is their main defense as few are poisonous. Their soft bodies are unprotected by armor, possessing no tough scales or defensive spines.

Some possess an ink sac for defense, which confuses their predator or prey, while others have been known to mimic other poisonous creatures. Mostly though they blend perfectly into their surroundings with camouflage so effect, they’ve been known to fool each other.

Cuttlefish have an internal shell known as a cuttle bone, this bone is often seen washed up on beaches where they are collected and given to birds as a good source of calcium and to keep their beaks in trim.

In a living cuttlefish, the bone is used to control buoyancy by adding or reducing the liquid to gas ratio. It’s this bone feature that sets them apart from the squid, who have no cuttlebone.

Cuttlefish are carnivores and eat fish, worms, crustaceans, and other mollusks. To feed, they quickly shoot out a long modified tentacle with suckers on the end, which grasps the prey.

The main method of movement is jet propulsion; this is achieved by taking in water through the gills and forcing it through the hyponome, a muscular funnel, by contracting those very muscles. Using this method they usually move backwards, but by aiming the hyponome in different directions they can steer their travel.

Both cuttlefish and squid can manoeuvre in any direction with the aid of a skirt of muscle that ripples around their mantle, but this technique is slower than the jet method.

Many cephalopods have short lifespans and will reproduce only once in the 2 years they are thought to live. Mating occurs face to face by the male placing sperm via a long modified arm, called a hectocotylus, in a pouch below the female’s mouth. Once fertilized the female will lay many eggs and probably die afterwards.

Shark, larger fish, other cuttlefish and, of course, man all prey on cuttlefish.

This species is well worth highlighting for its beauty and rarity. They are highly prized on a divers “must see” list. They are distributed through the central Indo region, and from the southern Philippines to northern Australia.

Once discovered, instead of leaving the area, flamboyant cuttlefish will usually stay in the same place for some months, so revisiting is possible. Rather than swimming, they prefer to walk the substrate on 2 front tentacles and 2 skin flaps located on the underbelly.

This is illustrated in the first image on the right. Look for the sandy appearance on the “walking” front tentacles and the underbelly skin flaps, this is where the creature makes contact with the substrate.

Flamboyant cuttlefish are active in daylight hours and coloration is generally brown to match the substrate (darker in Indonesia due to darker sand).

Like other cuttlefish, flamboyant cuttle fish produce instant colour changes. In particular they’re know for flamboyant displays of red, yellow, white and pink chevrons that move up and down their bodies, pulsating in a mesmerising rhythm.

This elaborate coloration may be a warning for a poisonous bite, like its cousin the Blue Ringed Octopus. Flamboyant cuttlefish’s maximum size is approx. 10cm. 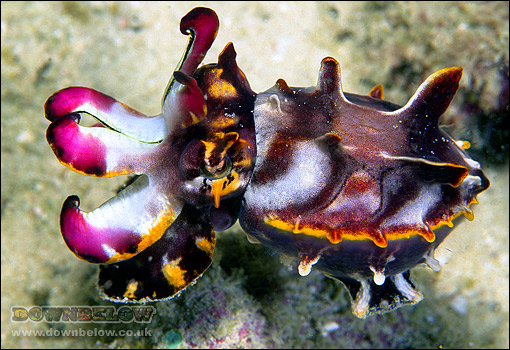 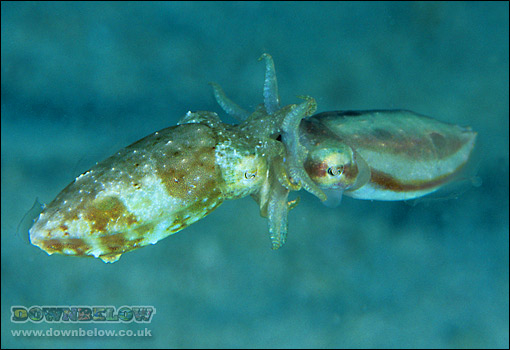 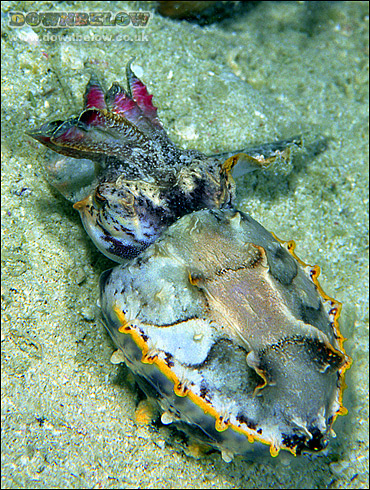 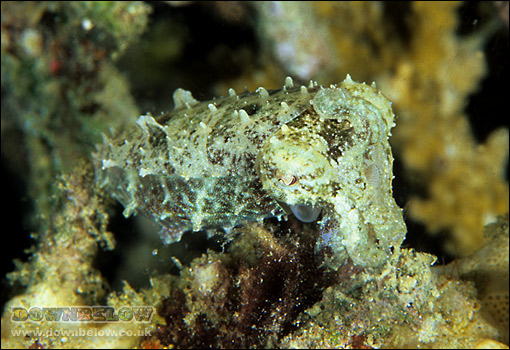 Again mostly active at night, this small species grows to a maximum of 5cm. Its cryptic behaviour is particularly effective making them very hard to find. 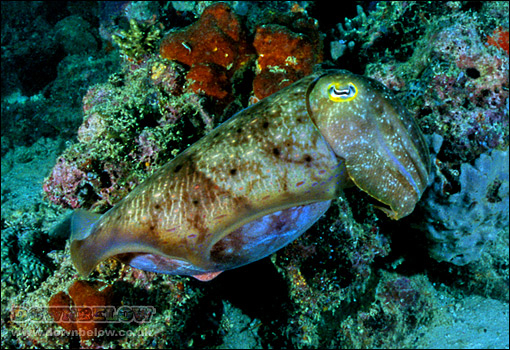 One of the largest cuttlefish, up to 50cm in length and found in waters from the Red Sea through to the entire Indo Pacific. 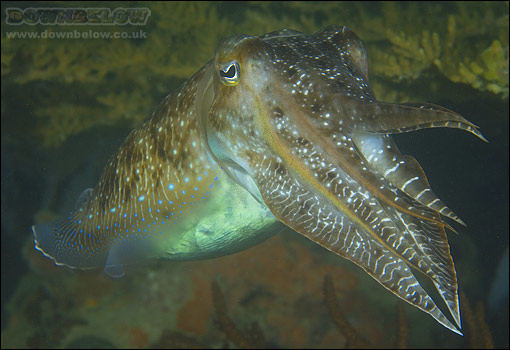 In its undisturbed state this species is quite easily identified by the lines on the body. However, if it feels threatened and displays texture and colour changes it may be easily confused with the Broadclub as they are both fairly large cuttlefish. This species can exceed 40cm in size and is found from the Red Sea to Indo Pacific. 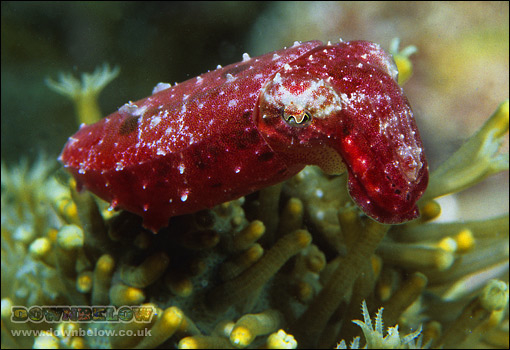 In the central Indonesian region a sub species of this appears to exist. They share behavioral and physical similarities. However the Semporna species is generally much smaller than the one found in Australia. We have observed and photographed this possible subspecies year round and have never found one to be larger than 5cm. 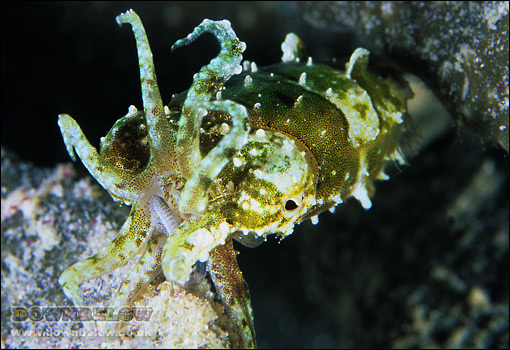 This species is mainly active at night but can be observed during daylight hours. Generally living in sand and silt habitats from shallow water to 180m. The maximum size being up to 10cm.

Without dissecting the cuttlebone correct identification of many sepia is very difficult, especially for the smaller species. Their ability to change skin texture and coloration to suit habitat and communicate makes describing some of these creatures provisional.