Please note that any discussion on colouration is tentative and based on our own observations and variations due to habitat and regions no doubt exist. 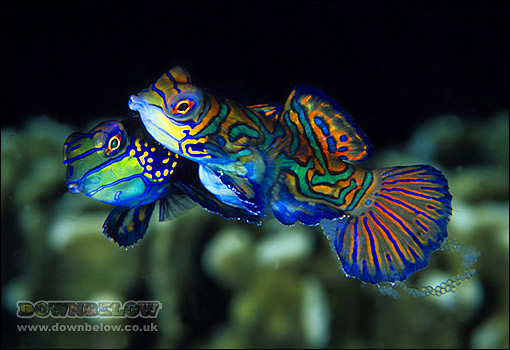 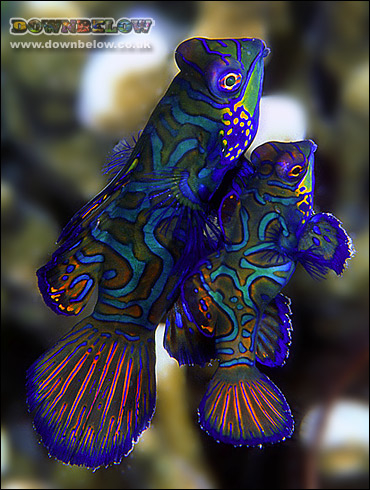 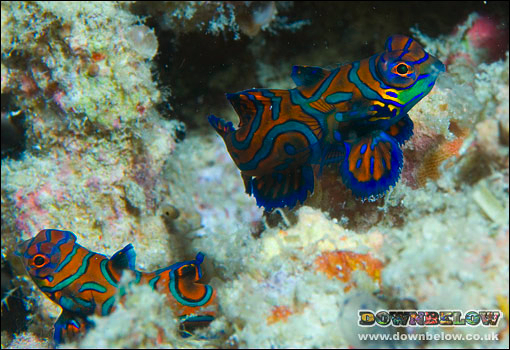 Arguably one of the most stunningly beautiful fish in the ocean, dragonets are highly prized by underwater photographers and, sadly, also by aquarium keepers.

They are usually found in very shallow water preferring the shelter of coral on reef crests and slopes, and feed off Small crustaceans including mysids, amphipods, isopods, benthic copepods, plus small worms and protozoans.

Instead of scales the Mandarinfish has slimy, smelly skin, which predators find distasteful. Their body is covered with elaborate dots, swirls and waves of orange, bright blue, yellow and green.

The male Mandarinfish is larger and overall more robust, with proportionately larger caudal and dorsal fins. The most distinctive difference, however, is the elongated dorsal spine being almost twice the size of the female.

The male is larger and overall more robustThey are one of the smallest ocean spawners and we have observed the Mandarinfish’s fascinating and complex mating ritual.

Around the time of sunset groups of 3 to 5 females congregate in a particular region of the reef. Males will go to these areas and, visiting several different groups, will display mating behavior.

As seen in these accompanying images, during the mating process the female rests on the male’s pectoral fin.

They will rise simultaneously in the water column up to 1 metre above the reef. At the climax and in a split second, the eggs and sperm are released and the fish disappear.

In the case of Mandarinfish size does matter! Females prefer to mate with the largest male as smaller males may require 2 or 3 attempts at the synchronized release of eggs and sperm.

The fertilized eggs are then left to the devices of the ocean currents.

After 18-24 hours they hatch into 1mm long larvae and remain planktonic for up to two weeks before settling onto the reef to begin their benthic life.

As this process takes place in the water column they are more vulnerable to predation during this time. 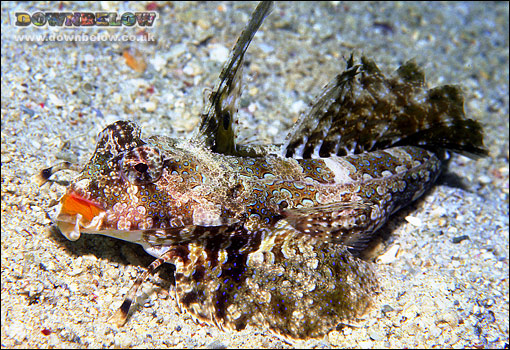 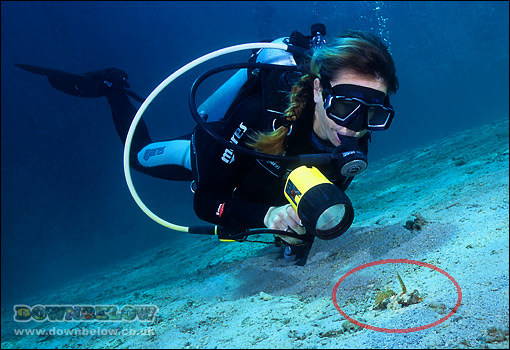 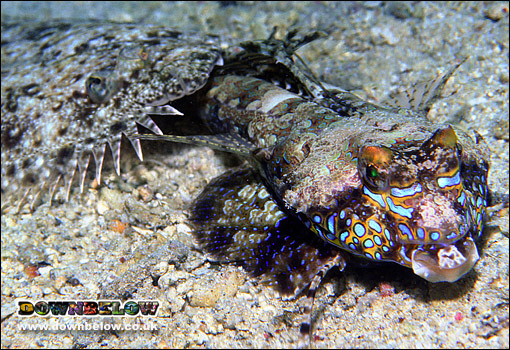 The Fingered Dragonet can be found at depths of 1m to 55m, usually residing on sand and mud flats or slopes in sheltered areas.

Often burying itself in the sand to hide from predation, if disturbed they dart away displaying their long spikey dorsal fin.

The Fingered Dragonet is large compared to other dragonets reaching up to 30cm in size.

The finger like appendages located forward of the pectoral fin what the fish is named for. The appendages are used for walking and digging for food in the substrate.

Male and females are easily distinguishable. The male is generally larger with bright blue, patterned dots on the head and long filaments on the first dorsal fin.

Unlike the female his blue false-eye is located high on the dorsal fin, whereas her’s is darker and lower.

The female has bright orange lips, clearly visible in these images.

On a number of occasions a flounder was observed resting on the Dragonets tail but only ever on the male, perhaps because it closely resembles its own colouring.

It can be assumed that the flounder benefits from the unwanted ruminants of food dug up by the Dragonet.

Exactly how the Dragonet benefits from this twosome is yet to be determined, possibly he feels protected by the cover. 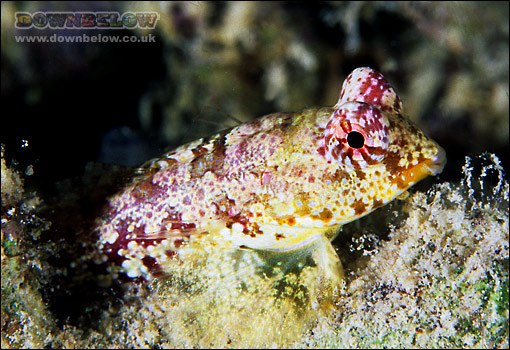 Other species of dragonet include Moyers and Bartels.

The Moyers has red bars on the tail and eyes, this species also has a large dorsal fin, seen folded in this image. 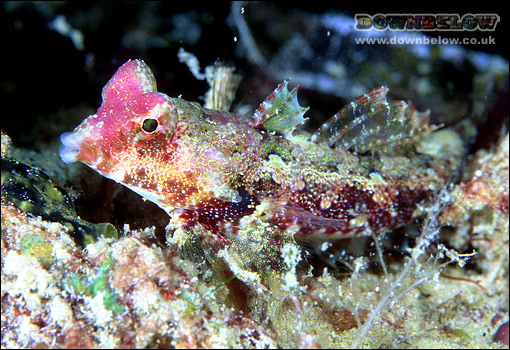 Brightly coloured to match their colourful coral habitat, this makes them very difficult to spot.

40 million fish are removed annually from the ocean for aquariums. The way in which they are caught and transported, coupled with lack of knowledge from aquarium keepers, result in very high mortality rates.

Due to their popularity Mandarinfish are particularly vulnerable to this trade. For this reason we have concerns over their population particularly as fishermen target the larger male, the most successful breeders.

Instead of keeping an aquarium, learn to dive or snorkel and observe the splendor of these creatures in the wild as we have done.