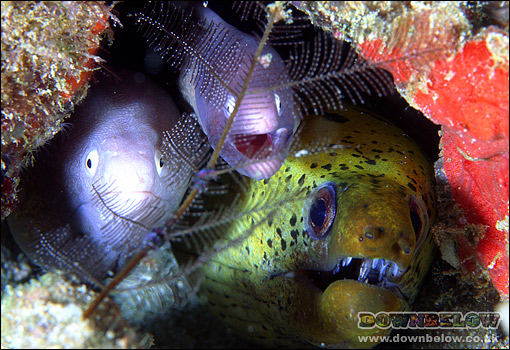 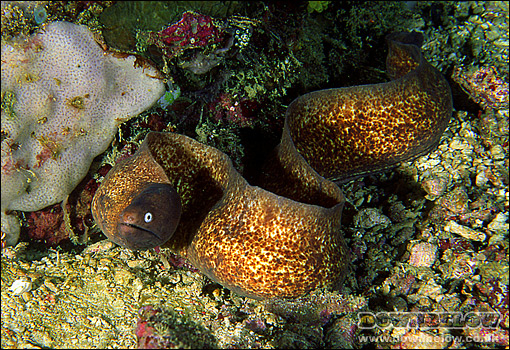 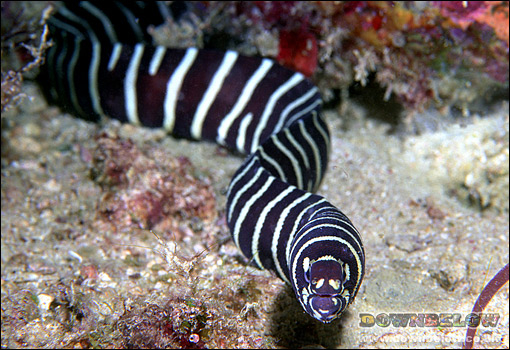 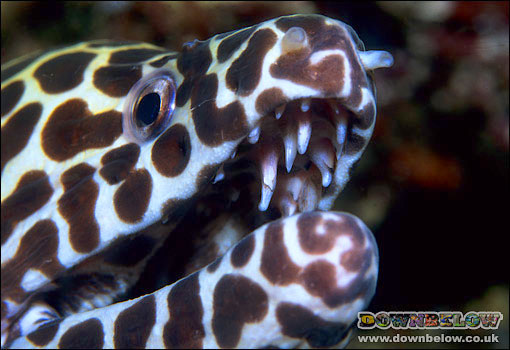 Found in Tropical and Sub Tropical Oceans and ranging in length from 30cm to 4m, Moray Eels represent an abundant and diverse group of approximately 10 genera and perhaps as much as 200 species. They can be seen on reefs, hiding between rocks and in holes, as displayed in the first image on the left. Often with their head and about a quarter of their body visible. They have small circular gills, so must maintain an open mouth in order to breath, which makes them look quite menacing.

Venturing from their daytime hiding places most come out to hunt at night, as in the third image on the left. Feeding on a variety of fish and invertebrates, cephalopods and occasionally other moral eels.

Some have very sharp teeth as seen in the fourth image on the left, used for tearing flesh from their prey, others, whose diet consists more of crustaceans have blunt teeth. Their poor eyesight is compensated with a highly developed sense of smell and they are able to knot their body whilst attacking for agility and power.

They can also survive out of water for up to four hours at a time, in fact we observed one hunting in the shallows for quite some time with the majority of its body out of the water.

These beautiful creatures don’t deserve the aggressive reputation gained from their opened mouth appearance, as with the majority of marine life they will only attack if provoked or disturbed whilst mating.

They are actually quite shy but inquisitive. Generally speaking, they are not suitable for aquariums, as they can grow too large for inadequate tanks. They are also fantastic escape artists owing to their strong, slippery and agile body.

Little is known of their mating habits, they are ocean spawners and appear to share territory with the opposite sex during the mating season. They are also known to congregate in groups when spawning.

Moray eels are prone carriers of Ciguatera, a naturally occurring poison that passes up the marine food chain and although some humans do eat certain species their flesh can be poisonous.

People have died after eating them.

A noticeable difference between this species and the Moray Eel is their pointed nose and muscular, bony, pointed tail used to bury itself deep into the substrate. A large family of eels with almost 300 species worldwide, probably many more undiscovered due to their secretive behaviour.

When sighted divers usually only see the creatures head peering out of the burrow as show in the accompanying image. If disturbed they retreat slowly down into the substrate, disappearing in front of your eyes. Banded species are more active hunting in the open, displaying aposematic mimicry of the venomous sea snake (for defense).

Photographing Ophichthidae requires patience and care, for after they retreat they rarely show themselves again for some time. 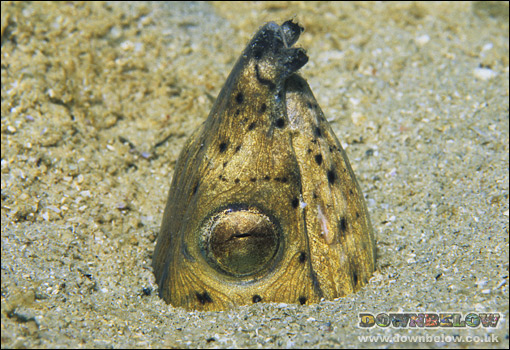 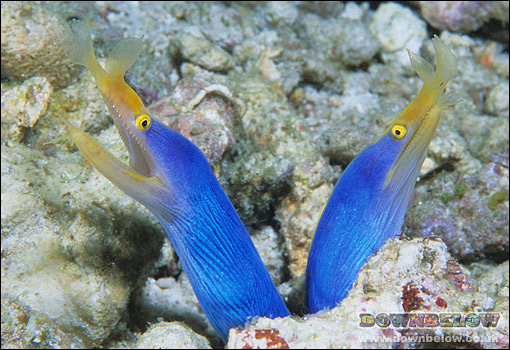