Day Trips of Over Night Stays 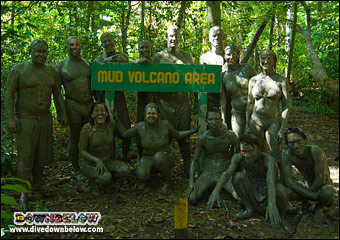 The island was formed on September 21st 1897 when an earthquake on the Philippine island of Mindanao triggered a volcanic eruption at this spot just off Borneo.

The eruption of mud and rock formed a new island 20m wide.

Over the next four decades subsequent eruptions developed two more islands, which have now joined together and three islands have become one.

The last eruption of the volcano was in 1941, but to this day warm mud continues to bubble from geometric vents on the island. 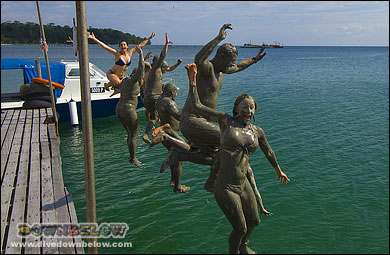 These mud baths are safe to bath in and can be accessed via a 1.2km trail through the tropical rainforest.

Although not proved by science, the volcanic mud is claimed to improve the complexion, relieve joint and muscle pain and remove toxins.

After washing off in the ocean your skin does feel considerably softer.

If nothing else, the mud baths on Pulau Tiga are great fun and very relaxing.

Pulau Tiga a relatively obscure, little known island before CBS chose it as the location for their 1st Survivor Island reality TV show.

Contestants were marooned on the island while cameras followed their every move.

Over a 39 day period they were faced with physical and mental challenges in an attempt not to be voted off the show, with the last one standing was the Survivor of the Island and won $1 million. 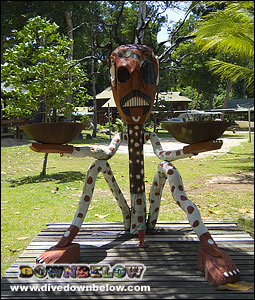 As a result of being a protected park, Scuba dive sites around Pulau Tiga are in excellent condition.

They provide the playground for schools of tropical fish, sea turtles, rays, cuttlefish, nudibranchs, lionfish and scorpionfish, which can be found all around the island.

Pulau Tiga is also home to some fascinating land based wildlife.

The island’s fine white sandy beach provides an idilic place to relax, swim and enjoy the peace and serenity of this uncrowed tropical paradise.

Those who are a little more energetic can trek through the 7 miles of trails now snaking through the rain forest. 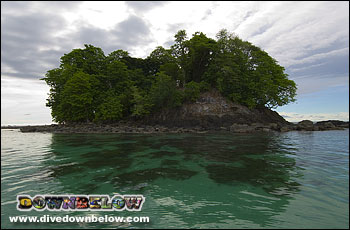 Speaking of snakes, nearby Pulau Tiga is Snake Island.

Named for the many sea snakes that inhabit and lay their eggs on the tiny, uninhabitated rocky island.

This fabulous little island is located 15 minutes speedboat ride from the Pulau Tiga island base.

Its great for snorkelling and a must see for visitors to the area.

We offer regular day trips to Pulau Tiga – Survivor Island and overnight stays to this fascinating location for divers and non-divers alike. 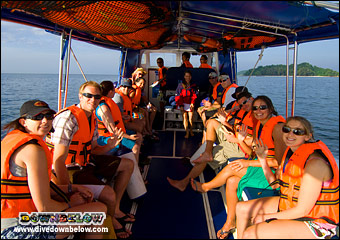 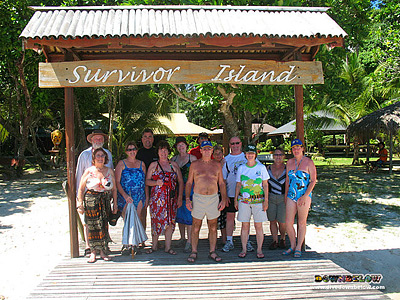 Those interested in the Scuba diving around Pulau Tiga will be pleased to know that there is great variety for all level of divers.

Pulau Tiga excels as a destination for macro lovers and underwater photographers.

The diving is relaxed yet rewarding.

Dive sites vary from shallow 3m down to 30m dive sites off shore.

Visibility averages around 15m with 30m plus on some of the offshore reefs. 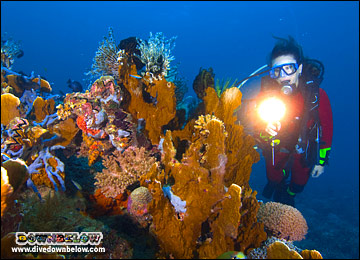 Throughout the dive sites many species of colorful clown fish can be found carpeting the volcanic rock that surrounds this young island.

Large marble rays are seen resting on the sandy ocean bottom next to sloping reefs.

Moray eels and sea snakes look menacing, but are infact quite unimpressed by our human presence.

Upon request forn new divers, we can conduct Discover Scuba Diving throughout the morning of our trip to Pulau Tiga.

After trying Scuba, many new divers may decide to repeat the experience.

If not immediately, then on other occasions or in different areas.

Others will choose to pursue certification by enrolling in a PADI Scuba Diver or Open Water Diver course.

Back to our Borneo Dive Site Page >>>