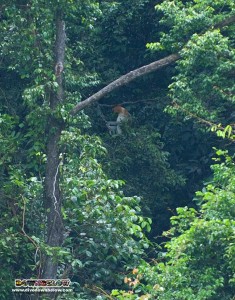 It seems a bit far fetched to think that the shy proboscis monkey could possibly inhabit the relatively small islands of a marine park, 10 minutes by boat from the shores of the busy city of Kota Kinabalu.

But over the years there have been some anecdotal evidence of exactly that.

We’ve heard of people who glimpsed what could have been a proboscis monkey in the islands’ jungles and the story of tourists seeing a group swimming between islands.

Even a tale of a boatsman who saved a nearly drowned proboscis monkey near one of the islands.

But to those who know proboscis monkeys, the islands and how busy the park is, you may as well be telling them you saw Big Foot or a yeti.

But this weekend past the myths were confirmed. The legend was grounded.

Watching in awe our crew and guests saw a group of 4 proboscis monkeys make their way down from the thick of the Gaya island jungle to fairly near the dive centre where they sat around for a while.

Feeding on leaves they watched the divers watching them, the big male perhaps just checking that his territory wasn’t being infringed upon, reassuring himself of his dominance.

Richard, of course, managed to get his camera out in time to snap a few distant shots before the proboscis monkeys disappeared back into the Gaya island jungle. There’s a couple more shots on our Facebook page.

Although these critters are very shy, now would be a good time to book one of our Guided Jungle Trekking packages on Gaya island and try your luck.