Tunku Abdul Rahman Marine Park, Kota Kinabalu: There was a buzz of excitement around the dive station on Gaya Island in KK on Wednesday as Downbelow MD Richard return from a fun dive more buzzed than usual.

“I have found an awesome and rare creature,” he said, almost audibly panting in an email to the office, “stay tuned for an update.”

I waited with bated breath.

Richard must have some sort of TAR Park radar, because if there’s a rare creature in the TAR Park, he knows about it. And usually gets a photo of it too. 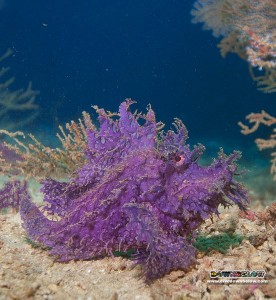 Yes, yes and yes – not only have they been spotted in the TAR Park, but Richard has the pictures to prove it too (check out or Flickr photo stream for some highlights).

So when he says he found something awesome, move to the edge of your seat and prepare to be awed.

The critter he discovered this time, luckily armed and ready with his camera rig, is a very rare species of scorpionfish.

This particular scorpionfish (Rhinopias fondosa) is usually only found in certain parts of Indonesia.  But such is the Tunku Abdul Rahman Park, where she lies just off the coast of Kota Kinabalu, Sabah, that you never know what you might find below the surface.

And like one of our Facebook friends rightly said: “Dive with the best, you will see the best“.

To see more of the rare scorpionfish, check out the Facebook album online.