Borneo, along with Sumatra, are the only place where orang utans are found in the wild

Plight of the Urang Utan

Orang utans are indigenous to Borneo and Indonesia’s Sumatra. Their exact population is difficult to determine, but evidence gathered through studies of orang utan nests suggests that there were fewer than 30,000 of them left in the wild. And that was 10 years ago.

Today there could be as few as 15,000 left, the majority of which lives in Borneo.

This drastic reduction is a result of human activity that affects their natural habit, the rainforest.

In the last 20 years an estimated 80% cent of suitable orang utan habitat has disappeared, and only around 2% of what remains is legally protected. 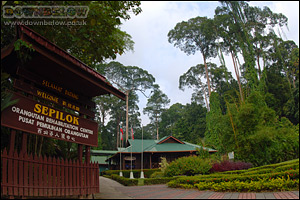 In 1962 Barbara Harrison, with the backing WWF, visited Sabah and reported that the orang utan was an endangered species and campaigned for its protection.

The following year orang utans became officially protected under the Fauna Conservation Ordinance, which, among other things, prohibits hunting, trading or keeping them as pets.

She then began to rescue young orang utans being kept locally as pets, and the idea grew of rehabilitating these animals to fend for themselves so that they might re-adapt to life in the wild.

In 1964 43km² of jungle rainforest was set aside and the Sepilok Rehabilitation centre was established to rehabilitate orang utans for reintegration into the wild.

Today around 80 orang utans are living free in the reserve and there are about 25 juveniles and babies living in the nurseries at the center’s buildings.

We have visited and been supporters of the centre for a number of years during which time we have heard conflicting opinions from people that have visited; some likening it to a circus or zoo, saying that it is too touristy.

If you’re going there expecting to see wild orang utans swinging from trees, forget it. Those that have been living in the reserve for a long time don’t come to the platform for feeding, they are not seen by the tourists, they have been rehabilitated.

What you see are those that are in the last stage of rehabilitation. They have been released but are either a little lazy or still a bit timid to find their own food, so they return to platform for an easy snack.

The food supplied by the centre is purposefully designed to be monotonous and boring so as to encourage the apes to start to forage for themselves.

Most animals eventually achieve total independence and become integrated into Sepilok’s wild orang utan population. To avoid overcrowding the forest, some are relocated to Tabin Wildlife Reserve, an area of virgin rainforest twice the size of Singapore.

In our opinion the centre, with the help of the Sepilok Orangutan Appeal UK, carries out great work for the conservation and preservation of the orang utan population in Malaysian Borneo, and they provide vital education for both local people and foreign visitors.

It is very rare and difficult to see these beautiful animals in the wild as they live in dense jungle and their numbers are so few. At Sepilok you are guaranteed to see the apes.

By understanding the work that is being done and why it’s done, you won’t be disappointed with your visit.

Putting the Wild in Wildlife

Although orang utans are the stars at Sepilok Orang Utan Sanctuary, the other wildlife is not to be sneered at. Pig tail and long tail macaques often join the orang utans and visitors during feeding times hoping for an easy meal.

If provoked, the macaques can get quite aggressive towards each other and visitors, but they are quite fascinating to watch as they groom and play together.

There are also various walks within the reserve taking you from tropical highland rainforest to lowland mangrove swamps offering the opportunity to see a multitude of wildlife.

Situated on the east coast of Sabah, 23km from Sandakan, the centre is easily reached. Frequent daily flights or buses and air-conditioned coaches go to Sandakan from Kota Kinabalu and Tawau.

A flight takes about 40 mins, whilst a bus/coach takes about 6 hours. If you do go by bus ask to be dropped off at Jalan Sepilok, which is a 2.5km walk from the centre.

From Sandakan you can join the Sepilok public bus, Batu 14, from Sandakan bus station near the central market or get a taxi.

If you are getting a taxi from the airport remember to purchase a taxi coupon before you depart.

Another option is to hire a car from KK. The roads are pretty good and a four wheel drive is not necessary to reach Sepilok.

A stay at one of the Sepilok Resorts is a must if you are venturing any where close to the rehabilitation centre.

If you don’t have enough time to stay the night, at least stay for lunch and have a wander round the beautiful landscaped jungle gardens.

Home to a rich variety of bird and wildlife, it’s within an easy 5 minute walk from the rehabilitation centre.

Our chosen resorts offer a perfect residence for those wishing to make a trip to the centre more of an experience.

Swing on over to our Wildlife Adventure Program page for packages we have put together that incorporates Sepilok Orang Utan Sanctuary and other wildlife attractions such as Kinabatangan River, Gomontong Caves and Turtle Island.