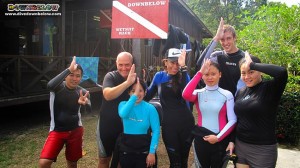 The blacktip reef sharks are so regularly spotted in Kota Kinabalu’s TAR Park, that it’s possible to schedule a shark dive with us with pretty decent odds of spotting one or two.

On this dive the office staff were treated to the sighting of 2 rather large blacktip reef sharks at the usual spot.

The sighting of the large sharks caused a bit of an adrenaline rush for our office girls, in spite of knowing that blacktips are timid and rarely pose a risk to humans.

Our resident PADI Course Director Richard regularly spot the blacktips and is collecting data on them.  He’s spotted over 15 individuals over the last few years.

Their increase in numbers is a great excuse to dive for TAR Park divers and for shark diving in Kota Kinabalu, Sabah, Borneo.