With our custom-made fast dive boats, the guys got there in no time and could set about the task of exploring these interesting World Word 2 shipwrecks. 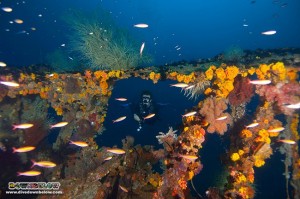 North Borneo, as it was known back then, saw a fair bit of World War 2 action, both on land and sea.

The 3 ships now lying at the bottom of Usukan Bay were part of a Japanese convoy, and sunk during the night of 1 October 1944 after being torpedoed by an American submarine, the Hammerhead SS-364, on only its 2nd war patrol.

However, because the ships were standard type 1K cargo ships, similar in length and size, it has been impossible to identify them individually.

Having been at the mercy of the harsh marine environment for 67 years now, the Usukan Bay World War 2 shipwrecks may forever be known simply as the Rice Bowl Wreck, the Upside Down Wreck and the Usukan Wreck. 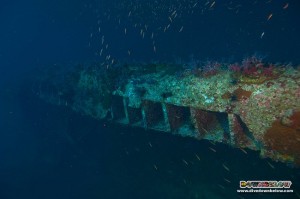 The wrecks all lie in 25m – 40m of water and thus requires at least an Advanced Open Water qualification to dive.

The wrecks lie in a spot which requires special effort to visit, so diving the Usukan Wrecks means that often you’ll be the only diver there.

For this reason the environment is also undisturbed and beautifully overgrown with all manner of soft and hard corals, which is inhabited by a wide variety of marine life.

Visit our Usukan Bay Wreck Diving album on Facebook for more images of these facinating wrecks.

If you want to dive the Usukan Bay Wrecks for yourself, contact us to book your trip.