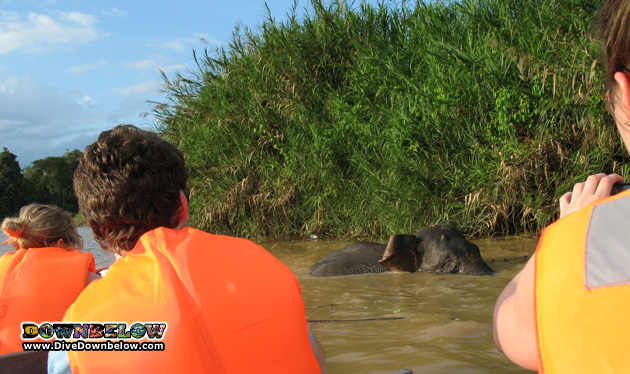 Our second group of adventurous Danes just returned to Kota Kinabalu after the east-coast Sabah leg of their Borneo Adventure with Downebelow.

The east-coast of Sabah is where the Borneo Adventure takes participants to experience Sabah’s wildlife, pure and unadulterated like nature intended.

Not only did they see orang utan, proboscis monkeys and river crocodiles fairly up close, but they had multiple encounters with the shy Borneo pigmy elephant.

Once encounter in particular was quite exciting.

“We suddenly saw an elephant in the river”, recounted an excited Abby, Downbelow’s staff who accompanied the group, “so close, that I had to sit back to take pictures.”

They also encountered a small heard, as well as two elephants protecting an elephant calf, the highlight of their river cruises.

Downbelow frequently hosts groups to experience Sabah’s wildlife both below the ocean’s surface and in the Borneo jungles.

To get more information about our Borneo Adventure, whether or not you’re part of a group, just contact us and let us make all your arrangements.